Approximately 11 million men and 3 million women in the U.S. are infected with oral human papillomavirus, or HPV, according to a new study led by University of Florida researchers. Men were also almost six times more likely to be infected with cancer-causing oral HPV strains. The study findings appeared on Oct. 16 in Annals of Internal Medicine.

“The rates of oropharyngeal cancer among men have risen more than 300 percent in the past 40 years, making it the most common HPV-related cancer,” said study lead author Ashish A. Deshmukh, Ph.D., M.P.H., an assistant professor in the department of health services research, management and policy in the UF College of Public Health and Health Professions, part of UF Health. READ MORE

A protein produced by the liver significantly reduces the chronic, low-grade inflammation that may contribute to aging and aging-related diseases, a group of University of Florida Health researchers has found. Using human cell and fruit fly models, the researchers showed the protein, known as human alpha-1 antitrypsin, has anti-inflammatory and cell-protecting properties.

That makes the protein particularly effective at stopping so-called “inflammaging,” chronic inflammation that has been implicated in a host of aging-related disorders such as cardiovascular disease, Type 2 diabetes and osteoporosis, said Lei Zhou, Ph.D., an associate professor in the UF College of Medicine’s department of molecular genetics and microbiology. The findings by 13 scientists in the UF department of molecular genetics, the College of Pharmacy, the UF Genetics Institute and the UF Health Cancer Center were published in the journal Aging Cell. READ MORE

On Friday, Nov. 3, nine outstanding early career (K99/R00 awardees) cancer researchers from across the nation visited the UF Health Cancer Center to give brief talks about their work, attend presentations by UF faculty and learn about the excellent faculty development opportunities at the University of Florida. The event was open to faculty, staff,  lab members and trainees. The keynote speaker at the event was Duane Mitchell, M.D., Ph.D., who gave a presentation titled “Next generation immunotherapy approaches for brain tumors.”

The 2017 American Cancer Society Making Strides Against Breast Cancer walk took place in downtown Gainesville mid-October. UF Health had 19 teams participate in the event and raised $15,075 for the fight against breast cancer. Overall, the event had more than 3,800 walkers and raised $211,510. Special thanks to our Real Men Wear Pink participants Bruce Mast, M.D., and Coy Heldermon, M.D., Ph.D.; together, they raised another $2,000.

Have you heard? The UF Health Cancer Center is on Facebook, and we recently launched a Twitter account. If you use social media — either personally or professionally — please consider following one or both accounts! These platforms reach both internal and external audiences and are a great way to stay up-to-date with events and research news. If you have something to share on our Facebook or Twitter pages, please send to communications@cancer.ufl.edu. 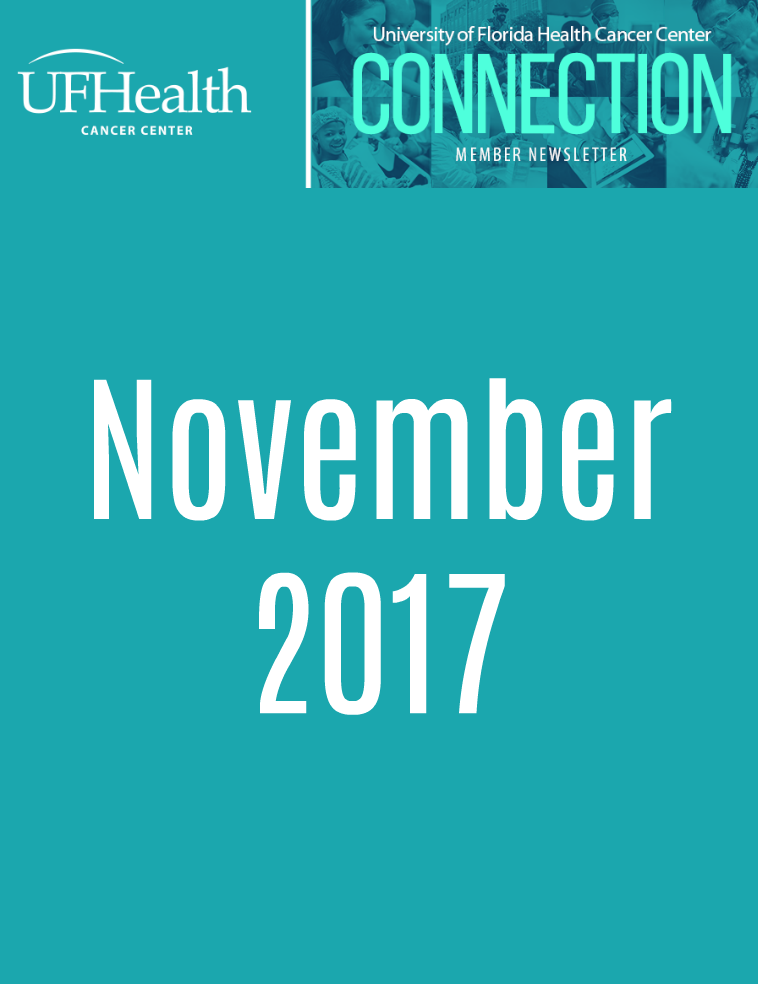